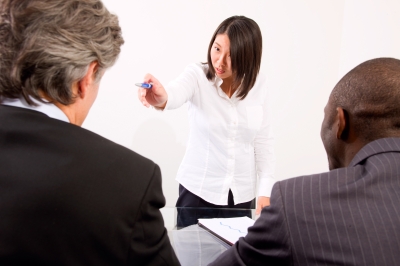 Some people are hard to like – even if they mean well. We’ve all been in the situation where we can’t connect with someone, and they may even irk us. Especially in leadership, where one’s every word and deed is amplified, a failure to connect is more than a byproduct of interpersonal differences. When leaders can’t draw in others then they can’t build followership.

In leadership or life, we all fall victim to expressing ourselves in ways that alienate the very people we’re hoping to impress. Here are five common, often well-intentioned, communication traits that create disaffection and disconnection. They’re equal parts lessons learned, pet peeves, and research-based wisdom.

Having a rich vocabulary is a wonderful thing. I, like many, love to learn new words. But when you’re trying to connect, it’s not about the cleverness of the word that counts, but how clearly you convey an idea. When you throw out words that most people either don’t know, or can’t figure out in context, you not only make others feel inferior, you might also be distracting them from what you’re trying to say. For example, if I said I were a logophile above, you might be stuck on that and not still with me. (A logophile is an obscure way of saying a lover of words. See how annoying that is?)

Often we want to use big words to show we’re highly educated or smart. Unfortunately, you might be doing just the opposite. According to a Princeton University study, the more arcane, blustery words you use, the less intelligent a majority of people will think you are.

It’s not to say you shouldn’t ever use big words – Scrabble night comes to mind — but remember that direct and simple boosts your credibility and your connection.

2. Littering your speech with acronyms or buzz words.

Regularly, articles come out on the Internet about the most obnoxious buzz words that litter our conversations. The words are contagious – seemingly out of nowhere everyone’s talking about leverage or synergy or thinking outside the box.

Again, we use these to show we’re in the know, especially when we hear them all over our companies.  But let’s remember that there’s a reason the movie Office Space’s running joke about the TPS Report is funny. Corporate jargon – and often the overly elaborate procedures that go with it – mostly strike people as annoying and even confusing.

Pay attention to people’s reactions the next time you throw out that acronym or trendy corporate jargon – you may see eyes glazing over or even looks of perplexity. It’s likely that at least someone doesn’t get the reference – but they’ll never let on if everyone else seems to know it.

Not only are you getting in the way of a personal connection, clear communication is a vital part of an organization’s success. The consequences of clouding messages with buzzwords can be dire, costing companies billions of dollars annually from needless misunderstandings.

3. Correcting others about minor things.

You’re a perfectionist and like to fix yourself. It’s the same for everyone, right?  Not really. While correcting someone to keep them from making a big mistake or embarrassing themselves is helpful, pointing out minor mistakes is alienating.

It’s gracious to let small mispronunciations, name mix-ups, or inconsequential slips go. And please don’t correct anyone’s grammar who is over the age of 14. (And probably not even then if it’s not your kid or your student.)

Before you call out a mistake from another, think about the bigger picture. Is the flaw you’ve noticed something that’s sure to harm anyone? Are you correcting them to prove your own point? Know when to let it go.

4. Always needing to be right, and not admitting weakness.

The grade school lesson still holds: nobody likes a know-it-all. This is true whether someone is your boss or your neighbor. Many of us can fall into this trap because we want to show our knowledge or even enjoy a vigorous debate. We also love to be right. But just because you love to be right, doesn’t mean others love for you to be right. (Which makes them, of course, wrong.)

Know-it-alls are annoying, and even viewed as weak — they’re just afraid of being wrong.  As it turns out, studies back this point.

There’s nothing wrong with speaking up when it’s called for, but if you can, try to hold back and let others take the lead sometimes, even if you are the person in charge. Ask other people’s opinions and thoughts, even when you believe that you know the best course or have the final word. In fact, if you do have the final word, why do you need to prove yourself anyway?

5. Making the conversation about you in an effort to be empathetic.

This last point especially comes from a benevolent place. In our effort to show empathy, we can bring our own experiences into the conversation. For example, if you received tough feedback, I may let you know that I’ve had that happen too so you feel less alone.

This is where the fine line comes in, and it’s easy to step across it.

Empathy means that you identify with someone. While it’s a good idea to commiserate by sharing, if you go into too much detail it starts to feel that it’s more about you than the other person.  When people are going through something rough, most of the time what they want is understanding and support, not a one-upmanship on tales of woe.

Before you tell them how you understand what they’re going through because of something you experienced, ask yourself if the story is really worth telling. Will it help the person in some way?  If not, leave it out, and say something like “I’m sorry for what you’re going through.  I know what it’s like, and I know you’ll get through it.”

What communication traits bother you? Comment here or @kristihedges.

Leading During COVID: What To Say When You Don’t Know What To Say
Leading When the Plan is No Real Plan at All