Four Steps to Recover After You Lose It at Work 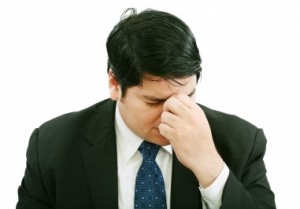 Tears, frustration and anger are common in the workplace, but you don't have to let an accidental outburst derail your career. Here's how to recover. (Image credit: David Castillo Dominici)


One of the most useless pieces of advice out there is to not take work personally. Work is inherently personal. It’s your ambition, capability, intelligence, and likeability intertwined, at play, every day. It’s better to consider that given how personal work is for most of us, what’s the best way to manage and cope when things don’t go as we desire.

Because sometimes they don’t. And though we struggle to do our best, we lose our composure.

I regularly coach through how to repair damage from these blow-ups (whether my client is the cause or the recipient). These stress-filled moments happen anywhere and to anyone. It can be a manager who hurls anger at a politically motivated colleague, or lashes out in frustration at an employee. Or the outbursts take the form of tears. (And no, not just from women.) People sometimes cry in response to negative feedback or out of sheer aggravation. We’re human; it happens.

Most of us have been in this emotional neighborhood. And we feel awful afterwards. The last thing we want is for our credibility to be permanently damaged.

We want to recover from the  incident, but we’re often paralyzed over anxiety that we’ll make matters worse. After having an emotional outburst, you can temporarily lose trust in yourself to communicate dispassionately.

If you find yourself in this situation, here are some guidelines to follow:

1. Let the steam leave the room.

Give yourself enough time and distance to collect yourself. For many situations, letting the issue rest overnight is a good rule of thumb. If the issue hits a duller nerve, an hour away at lunch might do the trick. Be intentional about giving yourself some space but be mindful of not using it as an excuse to dodge the issue.

We all understand that dust-ups happen, but all the same, they leave a wake. You want to circle back to the person as soon as you’re relatively calm, and apologize for the behavior. Key note: this  is not the same as apologizing for the reason for the behavior. You may be entirely justified in your feelings. Don’t get stuck on that point.

You don’t have to say a lot. You can deliver a simple “I want to apologize for raising my voice earlier today. It’s not how I wanted to approach this issue.” If it’s highly charged, you may want to make the apology quickly, and set a date to circle back later to discuss the wider issue.

There are certain people that set us off more than others. You may even find yourself gearing up for conversations with them because they cause you to react to negatively. As management consultant Steve Tobak explains, these are exactly the people with whom you need to proactively strengthen relationships. Even though it seems scary and intimidating, if you need to work with them, you’re better off expanding your perspective by getting to know their motivations. You may even learn that you’ve been misinterpreting their behavior.

4. Figure out what’s behind the emotion.

Tobak also cautions to explore where the frustration comes from. Some people are prone to anger — researchers have even identified an “angry gene” that hotheaded people have. We also know from neuroscience research that humans have universal triggers that put us into fight or flight mode. Author David Rock calls this set of emotional derailers SCARF — status, certainty, autonomy, relatedness and fairness. When we feel threats to them, we overreact from instinct.

I find that it can be helpful to cross-examine yourself. Start with the incident and repeatedly ask, “What’s that about?” For example, if you blew up at a colleague the first answer might be, “He made me angry by ignoring my request.” Then ask again, “What’s that about?” The second answer might be, “I feel like people here don’t respect me.” Keep going until you get to the root issue.

When you figure out what the core issue is, then decide how much merit it has in the first place. Often times, it’s more unconscious emotional trigger than fact. If you recognize and label it, you can gain the wisdom to help avoid outbursts in the future.

Kristi Hedges is a leadership coach, speaker and author of Power of Presence: Unlock Your Potential to Influence and Engage Others. More at thehedgescompany.com.