The Most Common Feedback Mistakes 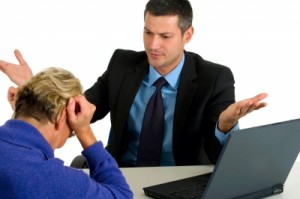 When giving feedback, what you say is less important than how you say it. Here are five feedback mistakes to avoid.


There’s a lot of feedback out there about feedback. Organizational cultures are reworked to support it, managers are expected to give it, and we’re all supposed to seek it out.

We know that to increase performance, feedback is essential. It’s a personal GPS that helps us go in the right direction without veering too far off track. It can seem at times that between performance reviews, talent reviews, and professional development assessments, everyone is getting their fair share of feedback — and then some. However, it’s still a common refrain from employees at all levels that they aren’t getting enough.

Even with good intentions and organizational support, people struggle with providing actionable feedback — both positive and negative. It doesn’t come naturally, and time constraints and distributed workforces exacerbate the issue. Further, there are all-too-common bad habits that we’ve picked up that get in the way of effective feedback. Here are five mistakes that create unintended consequences. See how they resonate for you.

When giving feedback, we’re often cautioned to balance any criticism with positive comments to cushion the blow, and keep the other person positive. We don’t want to demotivate someone — or even worse, push them out the door. So we use the very common tactic of putting “pillows” of positive feedback around the constructive criticism in the middle.

Studies have shown that this type of feedback leads to confusion, and causes a distraction from the essential problem that needs to be fixed. Just as bad, the feedback can come across as insincere and condescending. If you’re the recipient of such feedback, you’re generally just waiting to get to the real point — and preferring to be treated like an adult who can handle the truth. In fact, the only person who feels better from this approach is the one giving the feedback.

In Harvard Business Review, organizational psychologist Roger Schwarz suggests a transparent, mutual learning approach. Managers should feel empowered to express the problems they have with an employee’s performance. Asking specific questions that uncover each person’s role in the problem — even the manager’s — can lead to deeper learning. The message is clear and not muffled by conflicting positive comments. And it’s less emotional or confrontational.

At times, we’re generally frustrated by a direct report’s behavior yet we’re not able to describe it well. We may even believe it to be a nebulous behavior problem. So we use phrases like “You need to be more proactive,” or “I need to see more commitment.” For the person receiving the feedback, these types of words don’t give them enough specifics to create a solution.

For every piece of feedback, use concrete examples, especially recent ones. If it’s a broader issue, have multiple examples over time to show your concerns.

Research shows that feedback is not a one-size-fits-all phenomenon. Different types of people want different types of feedback, depending on where they are in a project or a career. When people are new at a task they need more positive feedback. As they move to a higher level of experience, they crave constructive criticism to stay sharp and increase performance.

Hershey and Blanchard’s Skill Versus Will matrix, outlined here, demonstrates how to differentiate feedback based on these two elements, and can be a helpful guide.

Where you give feedback matters greatly. The adage to praise in public and punish in private exists for a reason. Giving feedback in a collective environment, like a weekly meeting, can cause embarrassment and stress. Even if you as a manager don’t think it’s particularly harsh, that doesn’t mean the recipient feels the same. A quick, critical comment about an employee’s performance can have a disproportionate impact.

Harvard Business School’s Robert Pozen not only recommends keeping criticism private, but he also suggests telling an employee that you’d like to give him or her feedback beforehand. “That statement lets the employee prepare emotionally for what you’re about to say,” Pozen writes in The Harvard Business Review. Giving people time activates the calm, rational part of the brain, and lessens the likelihood of a defensive, emotional reaction.

5. Overreliance on positive or negative feedback

Depending on our personalities, some of us find it easier to provide one kind of feedback over the other. For example, some highly analytical people tend to lean on constructive feedback, and can find positive feedback to be fluff. They may even think they give more than they do.

It’s important to know what you gravitate towards, and to shore up your weakness so you provide a balance of feedback. Even too much positive can be, well, too much. As Professor Michael Perone observes, “Too much positive reinforcement can lead to fatigue or praise overload…which can diminish the results.”  Clearly, managers need to be able to give both negative and positive feedback, and in a proportionate way.  A good way to measure what you’re saying is the 5-to-1 rule – try to say five positive things for every negative one.

What kind of feedback are you getting? What challenges you in giving it? Comment here or @kristihedges.

« How To Negotiate for More Money
Is Authentic Executive Presence an Oxymoron? »