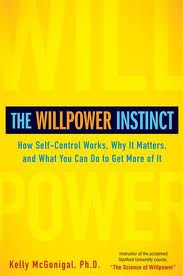 There’s no shortage of well-intended advice out there about how and what we should change. We may want to become an inspirational leader, lose weight, be a better parent, stop a bad habit, or as I wrote about recently, simply be more present. It strikes me that all of the advice in the world hinges on one key ingredient: personal willpower.

Without our own willpower to affect change in ourselves and commit, even the most groundbreaking ideas are mere words. In fact, self-control has been positively correlated to success, and found to be instrumental to strong leaders. It stands to reason that if we want to get better at practically anything, we’ll benefit by building our willpower.

Of course, every day can be a struggle when it comes to self-control. It seems like some people have more than enough (triathletes, I’m talking to you), while others can’t finish a project on time to save themselves. We often label people as having it, or not.

But is this true?  According to experts like Stanford University psychologist and author Kelly McGonigal, willpower is actually like a muscle – the more you use it, the stronger it gets. This may explain those people who seem to live in almost total discipline. It’s not that they have more willpower, but that they constantly exercise it.

Here are some suggestions from McGonigal to help you strengthen your willpower:

It’s easy to give up on something if it seems too hard. Keep your goals reasonable.  For example, if you’re not a morning person, it’s unreasonable to set a goal to get up and exercise at 5 AM six days a week.

When making changes, it’s best to start small and build. In the example above, instead commit to exercising at 7 AM two mornings a week for 30 minutes, and when you’ve gotten used to that, you can increase the amount of time.

To build motivation you need to build wins. “Setting small goals will give you small successes that will motivate you to continue,” McGonigal affirms.

Usually when we have to exercise self-control, it’s a battle of what we want (reward) versus what we can’t have (punishment). Since our brains our wired to seek rewards, that stresses our willpower abilities. For example, if you want to eat a cupcake, your thoughts will focus on how fun it would be to have it (reward), weighed against the fact that you’re trying to eat less sweets (punishment).

Instead reframe the punishment into its own reward. As this article suggests, try to find the positive side of doing without. Going back to cupcake scenario, you could think, “If I forgo this cupcake, I can have the steak tomorrow at my birthday dinner.”

3. Use your focus strategically.

Focusing on something you want makes you want it more. This can work positively or negatively. If you’re trying to learn a new skill at work, keeping reminders on your desk or smart phone will help you live into your goals.

Conversely, if you’re trying to give up something, the more you think about it, the more your willpower will be stressed. Learn to distract yourself. When you want to do something you shouldn’t, get away from your desk, go for a walk, or make it a practice to sleep on it. I’m often amazed at how the impulse subsides.

Most experts say that if you fail at self-control, making yourself feel bad about it undermines long-term success. If a goal feels unattainable, you’ll just give up.

So if you procrastinated away the afternoon when you should have been working on that presentation, acknowledge that you slipped, and tell yourself it’s alright and that you’ll try harder the next time.  If it’s difficult for you not to be self-critical, here’s some good advice from FITNESS Magazine contributor Kate Rope: “Write down the things you say to yourself when you fall short of your goals, then rewrite them as if you were talking to a pal.” You would never be that hard on a friend.

5. Watch out for willpower drainers.

Exercising willpower takes considerable effort. That’s why we’re exhausted after having to be “on” all day, exerting constant self-control. It’s important to acknowledge your humanness. In an intriguing article, Kelly McGonigal analyzed the way leaders and those in powerful positions can show immense willpower, but how no one is perfect. If they keep going, denying themselves, working to the point of exhaustion, McGonigal says, they also have a tendency to fail hard when they fail, leading to high-profile scandals, corruption or addiction. (Carlos Danger, anyone?)

McGonigal suggests that for those of us whose willpower is working full-time, some rest might be in order. Fatigue and hunger are shown to significantly reduce impulse control. Even those who seem to have all the willpower in the world slip up. They get back up by giving themselves a break, with the knowledge that exercising willpower is part of life.

Have some of your own willpower advice? Share here or @kristihedges.

Remember What You Loved About Your Job? It’s Still There If You Look.
Leading During COVID: What To Say When You Don’t Know What To Say