Can You Spot These Mad Men Behaviors In Your Office? 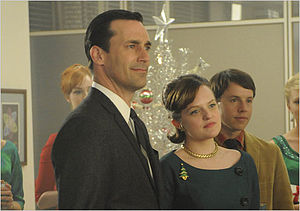 Think Mad Men office behavior is a relic of the past? Don't be so sure. (Photo credit: Wikipedia)


I’m all in for Mad Men. The show had me at the pilot episode. There’s something about creator Matthew Weiner’s subtle characterizations juxtaposed against the stark realities of culture that get me season after season. The viewer knows how the era ends — it’s only the characters who remain in the dark, wrapping themselves around ideals which are about to implode.

And so it continues as Mad Men recently kicked off its fifth season. The generational shifts were more apparent than ever, and the broiling culture change that’s about to alter the nation’s identity is starting to emerge. Don Draper in bell bottoms? Give him three years.

I don’t write about TV shows (alas), but about leadership. And that’s one of the reasons I love the show, because it’s also a workplace drama. Generally, I watch it and thank my lucky stars that “girls” are no longer relegated to the secretarial pool, managers have to show decency, and people can’t smoke in the office.

For my Gen X brethren, even if we feel safely distant from such bad corporate behavior, our parents can certainly validate it. In the New York Times, writer Elisabeth Donnelly discussed how her mother didn’t find any of the throwback culture entertaining as she was more than happy to leave it behind.

But have we actually left all of it behind? As I watched this week’s episode, I was struck by how many of the themes are still relevant to today’s workplace. Yes, we’ve come a long way and here’s what has stayed the same:

The old guard can’t see the change that’s coming. Whether it’s the coming from the flower children or the millennial generation, when there are cultural, ideological shifts, those in charge refuse to believe. The ones creating change know with certainty what will happen — they have informed intuition and a sense of destiny on their side. But those in power dig in their positions with the time-honored idea that “this too shall pass” — especially since their generation knows better (thank you very much).

But of course change is the only constant. Everyone does get with the program eventually. Notice how no one is trying to deprogram millennials anymore? Rather, we’ve shifted to incorporating their ideas and embracing their work styles.

An inequality in work distribution is felt acutely. In Mad Men, Peggy and Pete are frustrated that they’re doing most of the work, while the senior partners are slowly checking out. This same storyline could be written for today. We don’t expect senior leaders to produce in the same way they did in earlier job functions — in fact, they shouldn’t. However, the need to show value falls on everyone. When it’s not there, even for a short duration, we all know it and respect is lost.

Nepotism makes everyone squeamish. In the Mad Men office, employees are on pins and needles trying to navigate working with firm partner Don’s new wife, Megan. Whether nepotism is as overt as promoting your spouse, or as subtle as surrounding yourself with cronies, it makes people uncomfortable. It upset the dynamic, prevents honest discussion, and stifles ambition. This may happen less now, but it’s hardly dead. Last week I was in two separate conversations with executives dealing with it in their offices.

Working mothers with young children need major organizational support. Watching the ultra-poised Joan  struggle to come into the office and fight for her job was enough to make any working mother sigh. (Perfect symbolic scene, by the way, as she awkwardly balances getting the stroller through the front door and we see the lost ease of her movement.)

While much has improved for working mothers, much has stayed the same. More companies have policies to help women combine motherhood and work, and yet, we still see far too many competent women dropping out because they can’t work it out to their satisfaction. Organizations that offer flexibility with an ambitious career track are all too few. For women who do manage successful careers with kids, when we talk about it common descriptors are “hard” and “exhausting.”

Ultimately, the reason Mad Men has such a fiercely loyal following is because the characters speak to us, and we can relate to them. Perhaps the enduring lesson of this season will be how cultural patterns of forty years ago are eerily familiar.

What did you think of Mad Men’s premiere? What workplace themes did you pick up? Comment here or @kristihedges.com.

Kristi Hedges is a leadership coach, speaker and author of Power of Presence: Unlock Your Potential to Influence and Engage Others. This post also appears on Forbes.com.