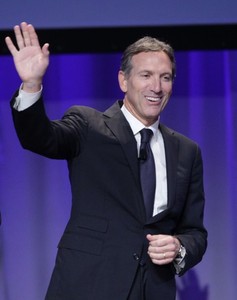 Starbucks CEO Howard Schultz is showing how to do well by doing good. (Image credit: Getty Images via @daylife)

For most leaders, the middle of the road is an alluringly comfortable place. It’s safe, well-trodden, and known. Unfortunately, what it isn’t is inspiring. Consider any inspirational leader and you’ll notice their proclivity towards the unconventional, the creative, and the tough choices. The great leaders eschew the middle of the road for the road less taken. And the best take the high road while they’re at it.

One of the benefits of our current age is that you can be a student of leadership wherever you are. Simply find a leader who builds both considerable success and followership — and you relate to — and thanks to the Internet you have a ready-made  teacher. I’m personally learning quite a bit lately about inspiration from Starbucks CEO Howard Schultz.

In fact, any manager today should be engaging in their own Schultz stalking (from a respectable distance, of course) to learn how to use their personal presence and platform to create a virtuous cycle. Yes, Schultz is insanely successful at what he does. And he’s done it by taking gutsy stances — many of which he does not because he has to, but because he feels they’re right.

Schultz also strikes the delicate balance of being decisive, assertive, and approachably real. And unlike iconic leaders in the vein of Steve Jobs or Jack Welch, he’s the kind of leader you’d like to have a beer (or yes, coffee) with.

So how does he do it? What can leaders of all stripes take away?

Lesson #1: Schultz defaults to being open, and willingly shares his story.

Many have heard Schultz tell his story. He grew up in the Brooklyn projects, the son of a struggling blue-collar worker who held a variety of service jobs with no health insurance. Schultz went to college on an athletic scholarship, worked for Xerox and other companies in sales, and eventually went to work for the tiny Starbucks company.

After seeing coffeehouses on every corner in Italy – places that not only served coffee but also served up a meeting place for the locals – he ended up buying the company and building his idea into the multibillion-dollar Starbucks brand. He did it despite the chorus of naysayers who were certain no one would ever buy a $4 cup of coffee.

Schultz is refreshingly forthright about all of it — giving ample opportunity for others to see themselves in his struggles.

Lesson #2: He’s not afraid to create a company that’s more than — even if there’s no precedent.

What Schultz had in mind was more than a $4 cup of coffee. He envisioned Starbucks as “the third place” that people spend their time between home and work. Schultz’s goal is a “customer experience,” not just a good cup of java. That idea is so well-rooted in our culture today that it seems as if it were always a foregone conclusion.

Schultz’s vision could have stopped there, but it didn’t. As he told an audience at UCLA in September 2008 in this video, his goal from the start was to build a “different kind of company” – one with a “social conscience” and a “soul.” He believes in a balance between making a profit and being a benevolent employer and a benevolent part of community.

Schultz incorporated a number of revolutionary concepts others thought financially unwise, including comprehensive health insurance for part-time workers and investing in the communities where it does business. We all know how that turned out — it became a major part of the Starbucks brand.

Schultz is quick to own up to his own missteps, and a much publicized near disaster. When Schultz resigned as CEO (but stayed on as chairman), Starbucks grew so rapidly that it lost the signature “neighborhood feeling” that had made it so successful.

Schultz came back as CEO in 2008 and realized he had to take drastic action. He scaled back, closing 900 stores. And he took action to regain the “neighborhood feel,” shutting the remaining 11,000 U.S. stores for one day to retrain 115,000 people. Next he took 10,000 managers to New Orleans for a business meeting to galvanize those on the front lines.

The managers (and Schultz himself) also contributed more than 54,000 volunteer hours in projects such as painting, landscaping and building playgrounds in Hurricane Katrina’s wake.

Lesson #4: He lives by the adage, “to whom much is given, much is required.”

Schultz doesn’t hesitate to use his influence to spread his ideas about corporations with a social conscience to the wider world. His activism earned him the No. 1 spot on Fortune’s Businessperson of the Year list for 2011.

He also gets people to respond. When Schultz called on corporations to join him in a moratorium on political contributions until Washington politicians came up with a bipartisan plan to address long-term fiscal issues, more than 100 signed on, including the CEOs at Pepsi, Disney, Intuit,  Whole Foods, J. Crew, AOL,  the New York Stock Exchange and NASDAQ.

In late 2001, Schultz once again showed his willingness to use his platform by announcing his Create Jobs for USA Program. The grass-roots private fund makes loans to small businesses in underserved markets nationwide. The Starbucks Foundation seeded the project with a $5 million donation, and asks its customers to contribute. For a donation of $5 or more, they receive a red, white and blue wristband with the message “Indivisible.”

More than 100,000 wristbands were sold in the first days of the launch, a testament to Schultz’s clout and the trust behind the brand. Corporate partners Google Offers and Banana Republic have since joined in the effort.

Lesson #5: Schultz understands his job is to inspire others.

Schultz is often described as self-effacing, and it’s clear that he’s not doing this for pure ego gratification. (Note how quickly he dispelled rumors he was running for president late last year rather than reveling in the attention.)

But Schultz does understand the importance of being visible for the right reasons, and of using his spotlight. We expect to see our leaders and it’s a gift to be able to learn from them in real time. I, for one, can’t wait to see what Schultz does next.

« Can You Spot These Mad Men Behaviors In Your Office?
Why Public Speaking Training is Often A Waste of Money »