How Hillary Became the Democrat’s Next Great Hope 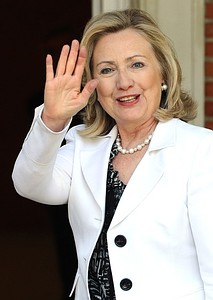 One of this month’s biggest news stories was not the current election, but whether or not Hillary Clinton would run in 2016. The Washington Post’s Anne Kornblut wrote a lengthy op-ed piece highlighting the insider chatter on Clinton’s plans and what her candidacy would mean for igniting the Democratic party. Clinton’s approval rating, at 65 percent, is the highest level in her career. Gallup Organization says she’s the most admired woman in America.

I can’t help but ponder what a difference four short years has made. How does a person go from being hailed as unelectable, whose mere face could rally the opposition and open their checkbooks, to the party’s great shot?

Certainly, being out of the campaign hot seat has helped. With cool distance from the presidential race, Clinton’s actions are seen in a different light. (Though this has had the opposite effect with Sarah Palin, the other high-profile woman in the 2008, whom Bloomberg puts at a 28% approval rating.)

But through my lens as a leadership coach who specializes in presence, I see a more richly textured story. Clinton has exhibited many behaviors that increase trust, connection, and credibility — three qualities that are essential to building followership. Whether she’s planning to run again, only she knows. However, her actions in the last four years speak volumes about how to rehabilitate a leader’s image. (Wall Street, take note.)  Here’s what stands out:

Putting the greater good above personal interests. Clinton shocked many when she joined Obama’s cabinet, and there were concerns that her ego would upstage the President. Instead, she’s been a loyal steward, representing both the President and the country through some of the toughest diplomatic issues in modern history. She’s admired and respected throughout the world.

Authenticity. Those who know Clinton often speak of her deep, wonkish intellect and love of policy. At State, she’s in a position to play to her strengths. We need the Secretary to know the intricate nuances of foreign policy, and be able to layer those against domestic issues. This is a job where being the smartest person in the room is a very good thing. Clinton seems at ease in this role, and as Kornblut writes, has nothing to prove.

Sense of humor. While we want our leaders to be capable, we also want them to be human. Clinton was dinged in 2008 for not being relatable. Her poll numbers went up only after she broke down and cried from exhaustion during a campaign stop. At State, we’ve seen a different aspect of her personality, in which she’s been able to reveal a lighter side. Whether it’s over being asked about the famous photo without makeup, her longer hairstyle, or the humorous “Texts from Hillary” site, she’s been able to take it in the appropriate stride.

Equanimity. I can’t think of any job that’s more stressful than Secretary of State, and especially during the last four years. Through it all, whether dealing with Libya, Afghanistan or now Syria, Clinton has been the calm amidst the storm. She’s appropriately forceful about U.S. involvement but always with supreme diplomacy. We’ve seen her exhibit this behavior through many trying times, and I believe that part of her approval rating is the safety she makes the American people feel that what we see is what we’ll continue to get. In leaders, we don’t like surprises.

What do you think of Hillary Clinton’s prospects in 2016? Comment here or @kristihedges.