When To Push And When To Let Go 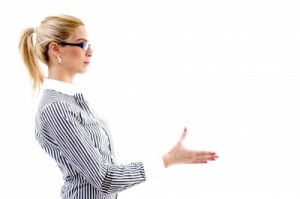 There are times when shaking hands and walking away is the best strategy. But it’s hard to know when to stop pushing. (Image: imagemajesty)

All around me, people are getting divorced. Colleagues confide in me at networking events, friends announce over dinner, and distant acquaintances post it on Facebook. As someone still (thankfully, fingers and toes crossed) happily married — and the only intact marriage in three generations of my family — I am awed by the difficulty of the decision to stop trying, accept the sunk costs, and just let go.

Because no matter who’s at fault, or who wanted what, at some point to find peace you need to stop pushing and accept what is.

You can use your full energy and control many variables, right up until you can’t.

Knowing when to push (or not) is hard enough for the little stuff, not to mention the life-changing decisions. Well beyond divorce, this concept of when to push or let go is a tender, nuanced affair that affects so much of our lives. It dictates foreign policy, the wars we fight, and the health of our most intimate friendships and family relationships. It influences our careers, and how we manage the job market. And if you’re in sales, you know an over-steer on one variable can kill the deal.

Confession: I am not very good at making the right call.

My natural inclination is to push, and if that doesn’t work, double down and push harder. If I’m really inspired, I’ll find another spot to push from.

So I’ve had to teach myself to hold back and let things play out. Because sometimes that’s the right angle to take, and other times it’s the only one. It also brings clarity and a chance to recalibrate.

True influence comes from the dance of pushing and retracting, in balanced orchestration so no toes feel stepped on yet positions are clear.

Knowing this doesn’t always make it easier though. Especially in times of stress or uncertainty.

(By the way, I know there are many people who have the opposite issue — they prefer to let the universe make the decision for them. It’s two sides to the coin, and can be a problem at both extremes.)

Thankfully, I’ve had some great mentors who have given me terrific advice on when to ease up on the reins. They’ve helped me learn when the best option is doing absolutely nothing, or letting a situation breathe awhile. I carry their words around like talismans to sort through and take out as needed. Here are some of my favorites to share for anyone else out there who wrestles with similar tendencies:

Learning to take one simple night to digest an issue before making a move was life changing for me. I can’t count how many draft emails I’ve deleted the next morning, or  meetings I realized I didn’t need to have. I used to believe that decisiveness meant solving as many issues as possible before collapsing at day’s end. I learned that true decisiveness is first determining which issues aren’t actually “issues” at all.

This expression is so apt because, just like that steak in the fridge, sometimes we improve when we stew in our own juices. One of my great friends, who is both professionally accomplished and zen-as-all-get-out, lent me this concept. My default is when in doubt, let it marinate. (Just not forever or things get squishy.)

3. Don’t negotiate against yourself.

Anyone who has been in sales knows how important it is to manage yourself during the wait-and-see phase between the proposal and the final decision. When you don’t hear back from a potential client in a timely fashion, which is pretty much always, you start to invent ways to sweeten the pot (read: push). It’s  tempting to fill the void by offering price reductions, or extra services, all based on a conversation you’ve had with yourself. You’re effectively negotiating against yourself, assuming the other person’s position and responding to it. It’s fine to follow up to show interest, but beyond that, stick your landing and stay put.

For me, one way I can have peace with the letting go part is when I know I’ve done my best, and contributed an effort that makes me proud. After that, I imagine a hand off, from mine to those of someone else. Even if it’s an idea, at some point it makes a transition in ownership. It’s not always easy for me to know when to stop owning whatever it is I’m delivering, but I find that as long as I can stand behind my part, I’m generally good.

5. Detach yourself from the outcome.

I have a great coach colleague who stresses this, and I borrow the idea often. Similar to the point above, this is learning to say: “Whatever happens, happens. I can learn, grow and succeed from any outcome.” There is immense personal power in this statement. It’s an automatic brake to any attempt to push too far, and imbues a quiet confidence you can’t buy otherwise. (Which is transformational in job interviews.)

This doesn’t mean you don’t care what happens! It simply means you’ve done your part, and you’re strong enough to handle any outcome.

How are you at knowing when to push or let it go? Comment here or @kristihedges.