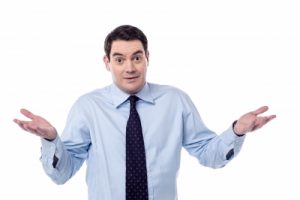 The hardest three words to say aren’t I love you – they’re I don’t know. That’s the opinion of Stephen J. Dubner and Steven D. Levitt, authors of the behavioral economics bestseller Freakonomics. From my experience coaching executives, I have to say they’re on to something.

I’ve seen even the most accomplished and seasoned leaders get tripped up when they’re confronted with a question they can’t answer – especially when the person asking is in a position of authority. This gets more fraught the higher you go in an organization. At some point you have to oversee a wider span of activities, and can’t be effective in your role if you have an execution-level view of every function. More often, you won’t have the answer.

Yet, leaders often prepare for an important meeting as if they’re cramming for an exam. They try to anticipate any question and have a prepared answer ready. They can make their direct reports crazy with requirements for pages of metrics and explanations. (Preparation for board meetings can be a particular bit of fun.)

Our propensity to always provide an answer starts young. In a study, kids and adults were given an unanswerable question. For example, after hearing a description of a family car ride, asking if the riders had lemonade, when that was never mentioned. When asked this irrelevant question, 75% of kids tried to provide an answer. Perhaps this is the result of conditioning, as students are encouraged to try to answer a teacher’s question no matter if they know the answer or not.

The researcher, Amanda Waterman, development psychology researcher at the University of Leeds, provides this perspective: “There’s a power differential between a child and an adult who’s asking them a question. And the child will feel that the adult is the person that has more of the power, and therefore perhaps they feel slightly disadvantaged. They feel like they want to show what they can do, and they don’t feel as comfortable admitting when they don’t know something.”

Looks like that conditioning runs deep. In the same study, 25% of adults tried to answer the unanswerable question as well. Note that the explanation above could just as likely describe a conversation between a boss and subordinate.

Certainly there are corporate cultures where not having an answer is career jeopardizing. But more often, we assume this to be the case when it’s not. Some neuroscientists believe that our need to know is actually linked to our brain function. When we have an answer, we get a hit of dopamine so we feel compelled to try.

I’ve conducted hundreds of feedback interviews with board members and senior leaders to gather information for my coaching clients. I’ve heard repeatedly that they want their leaders to show open mindedness, agility, courage, and presence. They want leaders who can deal with uncertainty and take risks. Having an answer for everything has only come up as a fault – discussed as a by-product of close-mindedness or parochialism.

In other words, senior leaders don’t need people who think they know every answer. They want leaders who can ask the right questions and find the answers.

Cultures suffer when leaders lack the courage to say I don’t know. Dubner and Levitt posit that if you have to be the expert and have the answer then you foster a culture that’s afraid to experiment. Without experimentation, there’s no innovation or risk. Further, being able to admit what you don’t know has been shown to increase trust. Just consider your own experience. If someone is selling you hard with an answer for everything, it shuts you down. If they can admit what they aren’t sure about, it’s an opening to a real conversation.

All this said, there are many ways to say I don’t know. The reaction you get is directly related to how you say it. You can come across as an absent-minded manager or a courageous innovator. Sometimes a simple, direct, “I don’t know” does the trick. At times, it can be helpful to have a few phrases at your fingertips that allow you to be transparent and remain centered. Here are a few other ways to say it that can help preserve your credibility, and even build it.