How Important Is Your First Impression Really? 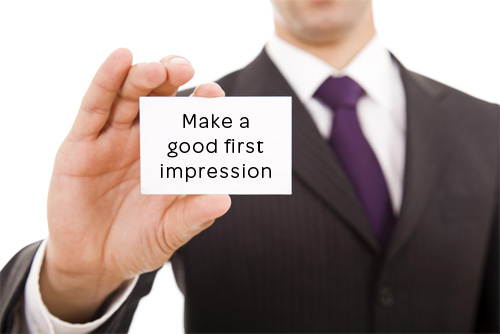 There’s a well-told adage that you only get one chance to make a first impression. From personal relationships to business meetings, we’re taught that people form opinions of us in a few moments, and that we should be ready to show our best at all times. On both sides of an exchange, we’re advised to trust our guts as our intuitions are telling us something important.

In our society, we put a great amount of energy into helping people form good first impressions, from crafting perfect elevator pitches to touting the importance of a firm handshake. You can be made to feel that if you blow a first impression, you’ll never regain footing.

Funny enough, there’s also quite a bit of discussion around avoiding our propensity to make snap judgments. Think of the other familiar adage about first impressions to never judge a book by its cover. Or consider the scores of HR programs that teach professionals not to pre-judge people based on race, gender, or age.

Are first impressions worth the time and energy we put into cultivating them? Or are they wildly limiting, and something we should teach people to avoid? It appears we are equally passionate about both sentiments. But what does the research say?

First impressions can be highly accurate

Citing a trove of studies, Malcolm Gladwell contends in Blink that our first impressions are fairly accurate and stand the test of time. He’s a proponent of a theory called thin-slicing, which states that we make a pretty accurate assessment of a person based on knowing them for only a few seconds.

“It is a central part of what it means to be human,” Gladwell writes. “We thin-slice whenever we meet a new person or have to make sense of something quickly or encounter a novel situation. We thin-slice because we have to, and we come to rely on that ability because there are lots of situations where careful attention to the details of a very thin slice, even for no more than a second or two, can tell us an awful lot.”

In the book, he goes on to provide examples of thin-slicing, such as great generals possessing coup d’oeil, or power of the glance, which enables them to immediately comprehend a battlefield.  Students are also astoundingly good at predicting who will be a good teacher from only a sliver of exposure to them.

But they can be frustratingly arbitrary

However, other behavioral economists, such as Dan Ariely, argue that first impressions can’t be trusted. Anchoring is a cognitive bias in which we tend to focus too much on the first piece of information we receive about something—whether it be a person, a product, or something else entirely—and then judge subsequent interactions in relation to that first judgment we made.

This doesn’t even have to be a serious or related anchor. To demonstrate this psychological heuristic, Ariely conducted a study in which he asked participants to write the last two digits of their social security number. Then, they were told to consider whether they would pay that number of dollars, say $75, for certain items, including a bottle of Côtes du Rhône, chocolate, and a mouse and keyboard. Next, they were asked to bid for these items.

We have ingrained impressions that get in our way big time

First impressions, while not only deeply affecting, can be flat-out wrong. Consider that leaders are more likely to be hired if they’re tall. And that job candidates with African-American sounding names on their resume are less likely to get interviewed.

Nobel Laureate, Daniel Kahneman provides an excellent example of how wrong these impressions can be. “Americans elected President Harding, whose only qualification for the position was that he perfectly looked the part. Square jawed and tall, he was the perfect image of a strong and decisive leader. People voted for someone who looked strong and decisive without any other reason to believe that he was.” And we know how that turned out.

One piece of good news: research shows that the more important the relationship is to us, the greater our openness to having our first impressions overturned. Think of a colleague you didn’t favor at first, but grew to like quite a bit. Though a poor first impression can create a relational headwind, you can make a conscientious effort to change that impression with increased exposure.

Kahneman’s book, Thinking Fast and Slow offers a solution: taking both your intuition and your reason into account. The focus of the book is the dual process model of the brain, which says that we have two thought systems: system 1, which is fast, intuitive and emotional, and system 2, which is slow, contemplative and logical.

While our instinctive, immediate judgments can be helpful, we need to make sure we check our emotional responses with thought and reason. In other words, as social psychologist Jonathan Haidt puts it, don’t let the emotional tail wag the rational dog.

For example, when you are interviewing a job candidate, if the person immediately rubs you the wrong way, ask yourself why you’re feeling that way and if that feeling is entirely justified—and if you’re not in a good mood, pay extra attention to your first impressions. According to Kahneman, when we are peevish or unhappy, we tend to lose touch with our intuition. In any situation, it never hurts to give it extra thought or get a second opinion.

How do you feel about your own first impression? Comment here or @kristihedges.